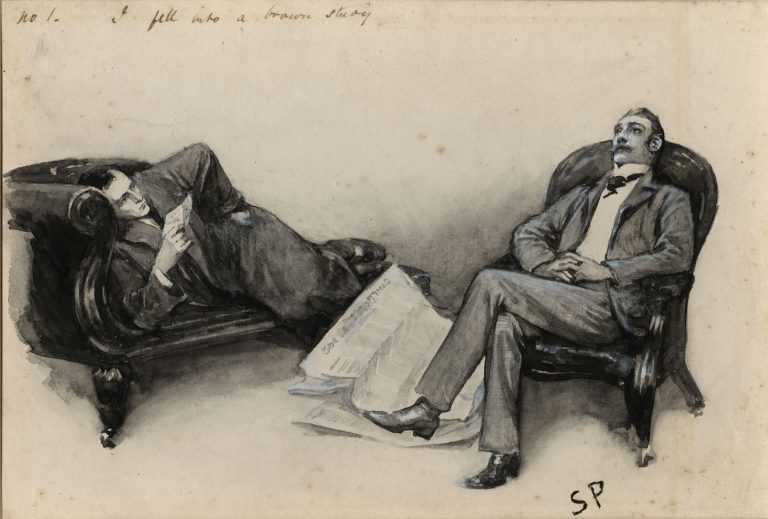 Some of the original Sherlock Holmes stories have appeared with slight variations over the years. Leslie S. Klinger, BSI, editor of the Sherlock Holmes Reference Library, explains one such variation below. When “The Cardboard Box” went briefly out of print, part of its opening scene was published in “The Resident Patient” instead, and the scene is sometimes still included in both stories. Read on to learn more.

When "The Cardboard Box" was removed from the first book edition of The Memoirs of Sherlock Holmes, the text of "The Resident Patient" went through a metamorphosis. The author of the various editorial changes is unknown, although it can now be definitely stated that Arthur Conan Doyle was personally responsible for the suppression of book publication of CARD, because of its sexual content. (1)

The original Strand Magazine version of RESI (2), commencing with the second paragraph (3), reads as follows:

I cannot be sure of the exact date, for some of my memoranda upon the matter have been mislaid, but it must have been towards the end of the first year during which Holmes and I shared chambers in Baker Street. It was boisterous October weather, and we had both remained indoors all day, I because I feared with my shaken health to face the keen autumn wind, while he was deep in some of those abstruse chemical investigations which absorbed him utterly as long as he was engaged upon them. Towards evening, however, the breaking of a test-tube brought his research to a premature ending, and he sprang up from his chair with an exclamation of impatience and a clouded brow."A day's work ruined, Watson," said he, striding across to the window. "Ha! The stars are out and he wind has fallen. What do you say to a ramble through London?"

The following version appeared in the first English edition of The Memoirs (4) and the American "New & Revised Edition" (5):

It had been a close, rainy day in October. Our blinds were half-drawn, and Holmes lay curled upon the sofa, reading and re-reading a letter which be had received by the morning post. For myself, my term of service in India had trained me to stand heat better than cold, and a thermometer of ninety was no hardship. But the paper was uninteresting. Parliament had risen. Everybody was out of town, and I yearned for the glades of the New Forest or the shingle of Southsea. A depleted bank account had caused me to postpone my holiday, and as to my companion, neither the country nor the sea presented the slightest attraction to him. He loved to lie in the very centre of five millions of people, with his filaments stretching out and running through them, responsive to every little rumour or suspicion of unsolved crime. Appreciation of nature found no place among his many gifts, and his only change was when he turned his mind from the evil-doer of the town to track down his brother of the country.Finding that Holmes was too absorbed for conversation, I had tossed aside the barren paper, and, leaning back in my chair I fell into a brown study. Suddenly my companion's voice broke in upon my thoughts.

"You are right, Watson," said he. "It does seem a very preposterous way of settling a dispute."

"Most preposterous!" I exclaimed, and then, suddenly realizing how he bad echoed the inmost thought of my soul, I sat up in my chair and stared at him in blank amazement.

"What is this, Holmes? This is beyond anything which I could have imagined."

He laughed heartily at my perplexity.

"You remember," said he, "that some little time ago, when I read you the passage in one of Poe's sketches, in which a close reasoner follows the unspoken thoughts of his companion, you were inclined to treat the matter as a mere tour de force of the author. On my remarking that I was constantly in the habit of doing the same thing you expressed incredulity."

"Perhaps not with your tongue, my dear Watson, but certainly with your eyebrows. So when I saw you throw down your paper and enter upon a train of thought, I was very happy to have the opportunity of reading it off, and eventually of breaking into it, as a proof that I had been in rapport with you."

But I was still far from satisfied. "In the example which you read to me," said I, "the reasoner drew his conclusions from the actions of the man whom he observed. If I remember right, he stumbled over a heap of stones, looked up at the stars, and so on. But I have been seated quietly in my chair, and what clues can I have given you?"

"You do yourself an injustice. The features are given to man as the means by which he shall express his emotions, and yours are faithful servants."

"Do you mean to say that you read my train of thoughts from my features?" "Your features, and especially your eyes. Perhaps you cannot yourself recall how your reverie commenced?"

"Then I will tell you. After throwing down your paper, which was the action which drew my attention to you, you sat for half a minute with a vacant expression. Then your eyes fixed themselves upon your newly framed picture of General Gordon, and I saw by the alteration in your face that a train of thought had been started. But it did not lead very far. Your eyes turned across to the unframed portrait of Henry Ward Beecher, which stands upon the top of your books. You then glanced up at the wall, and of course your meaning was obvious. You were thinking that if the portrait were framed it would just cover that bare space and correspond with Gordon's picture over there."

"You have followed me wonderfully!" I exclaimed.

"So far I could hardly have gone astray. But now your thoughts went back to Beecher, and you looked hard across as if you were studying the character in his features. Then your eyes ceased to pucker, but you continued to look across, and your face was thoughtful. You were recalling the incidents of Beecher's career. I was well aware that you could not do this without thinking of the mission which he undertook on behalf of the North at the time of the Civil War, for I remember you expressing your passionate indignation at the way in which he was received by the more turbulent of our people. You felt so strongly about it that I knew you could not think of Beecher without thinking of that also. When a moment later I saw your eyes wander away from the picture, I suspected that your mind had now turned to the Civil War, and when I observed that your lips set, your eyes sparkled, and your hands clinched, I was positive that you were indeed thinking of the gallantry which was shown by both sides in that desperate struggle. But then, again, your face grew sadder; you shook your head. You were dwelling upon the sadness and horror and useless waste of life. Your hand stole towards your own old wound, and a smile quivered on your lips, which showed me that the ridiculous side of this method of settling international questions had forced itself upon your mind. At this point I agreed with you that it was preposterous, and was glad to find that all my deductions had been correct."

"Absolutely!" said I. "And now that you have explained it I confess that I am as amazed as before."

"It was very superficial, my dear Watson, I assure you. I should not have intruded it upon your attention had you not shown some incredulity the other day. But the evening has brought a breeze with it. What do you say to a ramble through London?" (6)

This text is, of course, familiar from "The Cardboard Box," in which it had originally been published, and where it has continued to appear in all subsequent editions. It also continues to appear in the text of RESI in many American editions.

It had been a close, rainy day in October. "Unhealthy weather, Watson," said my friend. "But the evening has brought a breeze with it. What do you say to a ramble through London?"

Until proofs of the various editions are discovered (and no Watson/ACD proofs have ever come to light), the puzzle of the author of the changes remains!

1 . "There was a certain sex element in The Cardboard Box story and for this reason I discarded it when I published in book form," wrote ACD in a private postcard.

6. Note the incongruities: It is a "close, rainy day in October." "Parliament had risen." "Everybody was out of town." There was "a thermometer of 90."